What should an expat visit in Katendrecht when living in Rotterdam?

Rotterdam expat city guide: What should an expat visit in Katendrecht when living in Rotterdam?

Katendrecht is also better known as ‘de Kaap’. Katendrecht has an eventful history as peninsula of Rotterdam. In the late 19th Century it was housing the upper class of Rotterdam. This changed during the early 20th Century as a harbor was built. The houses of the upper class were demolished and replaced by houses for the working class. This resulted in a large international population. Workmen from China and the rest of the world lived here. Making it a busy quarter.

Nowadays Katendrecht is being remodelled once more and becoming more trendy. Let’s take a closer look at some interesting hotspots situated in Katendrecht. 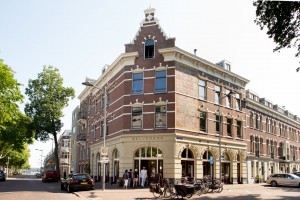 In 1943 it was shut down because since then also Surinamese people were forbidden to play jazz music. Nowadays the ‘Belvedere’ is a gallery and film house where all the nationalities and their history in Rotterdam are shown.

As you can see Katendrecht has a compelling history. The Fenix warehouses are a great example. The history of the Fenix warehouses is closely connected with that of Rotterdam and of Katendrecht in particular. Inaugurated in 1923 as the largest warehouse in the world, the enormous reinforced concrete building served the storage and transhipment of goods. In 1944 the warehouse was blown up by the German occupiers and since 1950 largely rebuilt as two separate buildings. Then the warehouses also got the current name: Fenixloodsen, named after the Phoenix, the mythological mythical creature that rises again and again from its own axis.

Fenix II was home to the Fenix Food Factory. But is bought by Stichting Droom en Daad to being redeveloped into a museum. Fenix II will be the place which tells the stories of millions of migrants, who arrived at and departed from these docks in Katendrecht. The renowned Chinese architectural firm MAD Architects has been contracted to design a panoramic viewpoint on top of the historic Fenix warehouse. The Rotterdam based company Bureau Polderman will be responsible for restoring the historic warehouse itself. The ground floor will offer space for cultural, culinary and creative facilities.

The first Fenix warehouse is already renovated and was awarded as most beautiful new architectural building in 2019. The building has been topped with luxurious apartments. On the ground floor the a couple of the founders of the Fenix Food Factory will start all over. Kaapse Brouwers, Booij Kaasmakers en Jordy’s Bakery will reopen a smaller foodmarket.

Walhalla is a theatre which started as an intimate theatre with only 76 chairs. It was opened in 2008 and in October 2014 a second hall was opened with 160 chairs. Theatre ‘Walhalla’ organises over 275 shows and has over 30.000 visitors a year.

Most of the cafés and restaurants are located around this square called Deliplein. The most captivating café is De Ouwehoer. This café might have the most beautiful interior of the whole city. Above that it is a fan favourite for notable Rotterdam people. It also has one of the largests whisky collections in Rotterdam.

Want to be suprised for dinner? Then a visit at Restaurant De Matroos en het Meisje might be your best bet. This restaurant only offers a Menu du chef. The only thing you have to do is tell the waiter how many courses you want.

Looking for something more refined? Kwiezien (it’s pronounced cuisine, see what they did there) has been labeled with a Bib Gourmand by Michelin. This means that the price-quality ratio is very high. CEO Baas van het Vlees is owned by Michelin chef Mario Ridder (his other restaurant is called Joelia and has one star). It’s a steakhouse dedicated to the best meat. Bistro du Bac is a French restaurant offering classics like oeuf en mayonnaise, terrines, steak tartare, onglet, canard, ile flottante and madeleines.

Interested in an apartment located in Katendrecht? Riva offers an apartment in the Fenix warehouse on the Kaap and several houses on the nearby Kop van Zuid and surrounding district. Hopefully we have shared some great ideas in this guide for visiting Katendrecht during your stay in Rotterdam as an expat. Stay tuned for more tips and tricks for other districts!

Other spots worth mentioning

SS Rotterdam: This anchored ship is one of the cruise ships which made the long journey from Rotterdam to New York in the 1960’s. Afterwards it became a cruise ship till 2000. From 2001 till 2010 it was renovated into a museum, hotel and café-restaurant. Since then it has been opened for the public.

Rijnhavenbrug: Bridge that connects Katendrecht with Kop van Zuid. Known for the padlocks which people hang up to show their eternal love to each other.

Tattoo Bob: Well known tattoo artist. His father started this tattoo shop in 1968 and learned him all about this craftsmanship. It can be seen as one of the last real tattoo gems of the old Katendrecht.